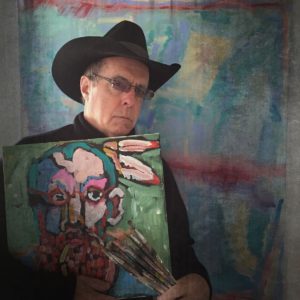 Tom Russell’s art has been acquired by the El Paso Museum of Art and is featured in a dozen galleries around the world, including The Rainbow Man in Santa Fe, The Liss Gallery in Toronto, Yard Dog in Austin, the Silvia Gallery in Switzerland, Cattle Tracks and Bill Bishop Gallery in Scottsdale, and others. Russell, a colorist in the tradition of Fritz Scholder, has been painting since 2003. He has published two books of his art, Blue Horse Red Desert and Folk Hotel: Reflections, Paintings, Lyrics.

Hollywood director Monte Hellman (Two Lane Blacktop) is a collector of Tom Russell art who states: “Tom Russell’s art brings together primitive, Native American, Southwestern, and Mexican influences as he does in his music, with a eye as keen as his ear.”

Brian Kanof, fashion photographer and owner of “Man In Black Tequila” with Kinky Friedman) is a Tom Russell collector who notes: “Rarely does an artist cross over to another discipline and reach—and exceed—the creativity and success that he did in his original pursuit. Tom Russell has done exactly that.”

Since releasing his first album in the mid-1970s, Tom Russell has become a legend in the Americana music scene, with over 30 recordings. He has worked with many of the top musicians in his genre, such as Dave Alvin, Lucinda Williams, and the band Calexico. His songs have been covered by Johnny Cash, Nanci Griffith, Doug Sahm, Jerry Jeff Walker, Suzy Bogguss, and many others.

Poet Lawrence Ferlinghetti has this to say: “Tom Russell is Johnny Cash, Jim Harrison, and Charles Bukowski rolled into one. I feel a great affinity with Tom Russell’s songs, for he is writing out of the wounded heart of America.”